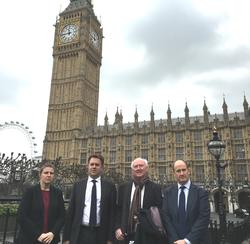 Julian has written a joint letter with York Central MP Rachael Maskell and Thirsk & Malton MP Kevin Hollinrake to the Prime Minister to lobby for new laws on guardianship for missing people to be included in the upcoming Queen’s Speech.

The law, increasingly known as ‘Claudia’s Law’ in memory of Claudia Lawrence who went missing in York back in 2009, would help families manage the property of their loved ones when they go missing.

At present when someone disappears their family is left unable to properly manage their financial affairs because banks and other third parties can only deal with their customers directly. This is clearly not possible when that person has gone missing.

Because of this legal loophole families who are already suffering the trauma of having someone they care about go missing are being left unable to cancel direct debits or ensure that mortgage payments are made.

In March 2015 the Government committed to creating a new legal status to assist families who find themselves in this incredibly distressing situation. A year has now passed with very little progress which is why Julian, Rachael and Kevin are now calling on the Government to deliver on its promises.

Figures from the charity Missing People indicate that there are currently 2,215 adults who have been missing for three months or longer in the UK.

The letter has strong cross-party support and has received the backing of 75 MPs who represent constituencies right across the United Kingdom. The way in which MPs from all sides have got behind this campaign shows how it sits truly above politics.

In a joint statement Julian, Rachael and Kevin said, “We are hopeful that this desperately needed legislation will be included in the Queen’s Speech in May. The Government have already pledged their support to this cause and recognised the problem that exists, and now it must deliver for the families of missing people right across the UK.

“When Claudia Lawrence went missing back in 2009 her family discovered first-hand the practical challenges of dealing with a missing person’s affairs. This added burden is completely unnecessary and we feel very strongly that change must be delivered as soon as possible.

“As Yorkshire MPs we each feel that we have a duty to Claudia and her family to deliver these changes; Julian is Claudia’s Father’s MP, Rachael would have been Claudia’s MP, and Kevin is Claudia’s Mother’s MP. We will continue to bang the drum on this issue until the much needed legal protections are introduced for families of missing people.”