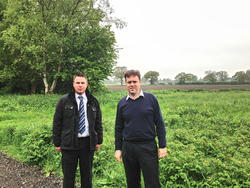 Controversial plans to build 102 homes on the Green Belt near Strensall Common have been rejected today by the Local Government Secretary Eric Pickles, overturning the Council’s decision to approve the plans.

The proposed development had been approved by City of York Council last year despite over a hundred objections being received from local residents. Mr Pickles decided to ‘call in’ the application for further scrutiny following a complaint by Julian . Local Councillor Paul Doughty and Julian both spoke at the subsequent public inquiry along with representatives of the Parish Council. This led to Mr Pickles overturning the Council’s decision on the grounds that the proposals would have had a detrimental impact on York’s surrounding Green Belt. Only a small handful of applications are called in by the Secretary of State each year and fewer still are overturned.

Following the public inquiry, the Department of Communities and Local Government reported that “The Secretary of State has found that the scheme would cause substantial harm to the Green Belt and that this harm would not be justified by very special circumstances. In view of his conclusions on the harm to the Green Belt, the Secretary of State considers that the scheme does not amount to sustainable development and that the adverse impacts of granting permission would significantly and demonstrably outweigh the benefits.”

Welcoming the news, Julian said “I am absolutely delighted for the residents of Strensall that our arguments have finally been listened to. It was clear from the very beginning that this development would irreparably harm the Green Belt surrounding Strensall, and the village’s infrastructure simply could not cope with such a large housing development. This precedent will send a shockwave through the Council and clearly demonstrates that their current Local Plan, which would devastate York’s Green Belt, must be sent back to the drawing board.”

Strensall Councillor Paul Doughty, who also objected to the development, added “This is tremendous news from Mr Pickles. It has been a long and testing fight but it is a great testament to the hard work of the Parish Council, the tenacity of our villagers, our MP and everyone else involved that the unjust planning decision passed by Labour Councillors has now been quashed and we are truly vindicated. My running mate in the Council elections in May, Cllr Helen Douglas and I will now focus on protecting other hostile challenges to our Green Belt locally in both Earswick and Strensall. However, this decision sets a strong precedent and gives us the extra confidence that Labour have been wrong all along in their ideological pursuit of putting our city’s Green Belt at risk ahead of brownfield development. The Conservative group in York will do all we can to preserve it!”

The news follows the recent rejection of Durham’s Local Plan by a Government Inspector, which would have swathes of Green Belt concerted over, similar to the developments currently proposed in York. The case against the Council’s current Local Plan is overwhelming, as the latest Government housing projections suggest that only 11,000 new homes will be needed in York by 2030, far fewer than the Council previously claimed would be required.

The Chancellor also announced yesterday that the York Central Site is to receive a share of £200 million of Government funding to promote brownfield development. The initiative will provide up to a thousand new homes in the city-centre, reducing pressure on York’s surrounding rural communities to absorb additional housing.