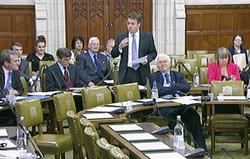 Speaking yesterday in a Parliamentary debate entitled ‘Planning, Housing Supply and the Countryside’, Nick Boles MP, the Planning Minister, highlighted a number of potential problems with the City of York Council’s draft Local Plan. Julian  also spoke in the debate and raised his constituents’ concerns and fears over the Council’s Plan, which could see 16,000 new homes built on York’s Greenbelt.

During the debate, Mr Boles insisted that local authorities should only provide housing to meet the need and that a Council’s calculation of need should be robust enough to stand up to scrutiny. He said that during the Local Plan-making process, local authorities will be required to “demonstrate to the Inspector the reasons it needs to supply those numbers, which cannot be that it is ambitious or that it is going for growth. If it has no good arguments or good evidence,” said Mr Boles, “it is a Plan to meet not need but ambition and dreams, which is a great and lovely thing but not what plans are meant to do.”

He went on to refute the Council’s assertion that they are legally required to provide a supply of land for development beyond the 15 year life of the Local Plan. During the debate, the Minister said:

“There is nothing in the Localism Act 2011, in the NPPF or in any aspect of Government planning policy that requires someone to plan beyond 15 years. So, anybody who is suggesting that there is any requirement to safeguard land or wrap it up in wrapping paper and ribbons for the future development between 2030 and 2050 is getting it wrong. There is no reason for it and my hon. Friend can knock that suggestion straight back to wherever it came from.”

Julian has welcomed the Planning Minister’s comments. Reflecting on the debate, he said:

“The Minister has highlighted key issues which the City of York Council absolutely must address. In the Council’s current draft Plan, over 1000 acres of land looks set to be taken out of York’s Greenbelt and safeguarded for future development after 2030. The Council’s leadership have persistently justified this as a legal requirement under planning legislation but the Minister has effectively said they’ve got completely the wrong end of the stick. If the Council persist in trying to take this land out of the Greenbelt, I have little doubt that they will allow it to be developed before 2030.

“The Council’s housing targets also have a lot to answer for. The Minister has been clear that Local Plans must be firmly based on the need for housing within the authority. While the City of York Council may have ‘ambitions’ to create 1000 jobs per year and ‘dreams’ to house these new workers within the authority, the Minister has said this is immaterial for the purposes of producing a sound Local Plan. I will be writing to the Council to ask them to review their stance on these important points, in light of the Minister’s comments.”