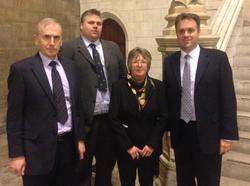 The Planning Minister, Nick Boles MP, has reiterated the comments he made in Parliament in October, that there is nothing in any piece of government planning guidance which requires local authorities to plan beyond the 15 year period. For York, this could mean over 1000 acres of land is set to be unnecessarily taken out of the greenbelt if the Council’s draft Local Plan progresses in its current form.

At a meeting in Westminster with Julian and some of his Conservative colleagues from the Council, Mr Boles confirmed that there is nothing binding the City of York Council to removing 1000 acres from the City’s greenbelt. Instead, the Minister said that the National Planning Policy Framework only suggests local authorities should ‘safeguard’ land ‘where necessary’.

In response to the comments made by the Minister during their meeting, Julian said:

“I welcome the Minister’s clarification that there is no requirement for any local authority to allocate land for development beyond the 15 year life of the Local Plan and I look forward to the withdrawal of the Council’s proposals to remove 1000 acres of greenbelt land for precisely this reason. When the Minister first made these comments back in October, I wrote to the Council’s planning chiefs to advise them as such and I am still awaiting their response.

“While there is a requirement to ensure the City always has a five year supply of housing allocations, the Council have until 2025 to safeguard land and they have failed to make a strong case to support making these decisions 10 years earlier than they need to made. By taking this land out of the greenbelt now, the Council are opening themselves up to pressure from developers to release it earlier than scheduled and to be frank I have no confidence in their ability to resist this pressure.”

Pictured: Julian with Councillors Joe Watt, Chris Steward and Jenny Brooks, who also attend the meeting with the Minister.