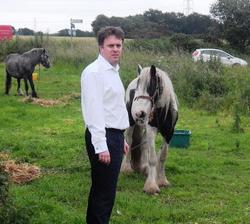 Julian celebrated victory today as his private members bill to protect horses from neglect cleared the House of Commons.

The Control of Horses Bill will make three major changes to animal welfare laws. Most importantly, the proposals will dramatically shorten the time it takes to rescue abandoned horses from over two weeks to just 96 hours. The Bill will extend the protection of the law to horses on private as well as public land, and will also allow rescued horses to be gifted to animal welfare sanctuaries for the first time.

Speaking in Parliament today, Julian said “Animal welfare forms the backbone of the Bill, which, in its amended form, will go a long way towards improving the existing legislation on fly-grazing. Clearly, we need to tackle fly-grazing consistently across the whole of England, on both public and private land, and that is the Bill’s aim. If we do not do that, this mobile problem will continue to move from farm to farm, and from council to council, with no respite in sight for the horses involved… The cross-party support the Bill has received is a fantastic example of how, even in the run-up to what some might say is the most important general election for a decade, those on both sides of this House can look beyond party boundaries and work together in the interests of the common good.”

The Farming Minister, George Eustice, commended the proposals. He said “I add my congratulations to my hon. Friend on getting his private Member’s Bill to this stage. I have been in the House for only five years, but I did have a private Member’s Bill in the first year of the Parliament. It was not successful, I am afraid; it did not even get its Second Reading, let alone progress to Committee, Report and Third Reading.

Former Minister David Heath also praised the Bill, saying “I welcome the Bill and warmly congratulate the hon. Member, who has achieved two things that I have been unable to achieve. First, as a private Member he has steered a Bill to this stage in proceedings, something I have never achieved in 18 years in this House. If the Bill passes through the other place, he will also, as a private Member, have put in place legislation on antisocial behaviour which it is an open secret I would have liked to have implemented when I was a Home Office Minister. This is a signal victory for common sense in dealing with an issue that is a real problem in many of our constituencies.”

The Bill will now enter the House of Lords where it will be scrutinised and hopefully approved before Parliament is dissolved for the General Election.

The full debate can be read here in full: http://www.parliament.uk/business/publications/hansard/commons/todays-commons-debates/read/unknown/234/