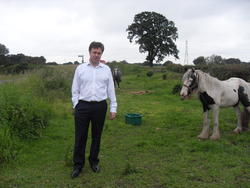 The Control of Horses Bill will not only shorten the time it takes to rescue abandoned horses from two weeks to just 96 hours, it will also provide farmers and landowners the power to rescue neglected horses from private land.

Speaking in Parliament, Julian said “As the Committee will no doubt be aware, it is absolutely essential that abandoned horses are offered the full protection of the law on public and private land. Just before Christmas, in my constituency, a dozen horses were seized by the local authority on council-owned land near Osbaldwick. I fear that hundreds more continue to be neglected on private land across the region and the country.

“It is my sincere hope that the Bill will make it onto the statute book and that this will be the last winter that abandoned horses are left outside in the cold without the protection of local authorities and private landowners acting in the animals’ best interests.”

Julian has received the backing of the National Farmers Union, the RSPCA, the Countryside Alliance, World Horse Welfare, the CLA, and the British Horse Society who have all united to champion the Bill.

The Executive Chairman of Countryside Alliance, Barney White-Spunner, has spoken of his support. Mr White-Spunner said “Fly-grazing is a practice that wreaks havoc in the countryside and can mean great misery to landowners and the mistreated horses alike. Until now the legal powers to address the problem have been lacking but if this Bill is passed it will be a significant step forward for animal welfare and landowners’ rights.

“We now call on the Government to ensure the Bill completes its passage in the Commons as swiftly as possible and that peers in the House of Lords give it their support so it will be on the Statute Book before the end of this Parliament.”

The Bill is due to have its Report Stage and Third Reading on Friday, 16th January, before heading to the House of Lords for consideration.