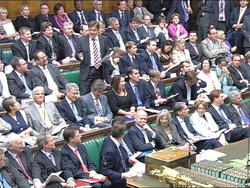 Following the vote last night Julian wanted to explain to constituents the reasons why he voted the way that he did, he stated that:

“I believe that the recent events which have occurred in Syria demonstrate a humanitarian catastrophe, the use of chemical weapons by the Assad regime is clearly an atrocious act of violence and my thoughts are with the Syrian people in this difficult time. The decisions over whether or not the UK should intervene and if so, how, are incredibly tough to make, but I am glad that the Prime Minister recalled Parliament to allow our options to be debated in full.

Fundamentally for me there are a number of unanswered questions about the consequences of any military intervention, firstly how does military action in Syria relate to the British national interest; what could the resulting consequences be for the region and how would Russia react? Once we made the decision to take military action there would be no turning back and military escalation and mission creep would inevitably follow. Finally, what is the end goal if Assad falls? Who replaces him, would it just be one evil deranged regime after another? For all of these unanswered questions I cannot support military intervention at this time.

I believe it is imperative we wait before making any judgements on action in Syria, as such I was pleased the Prime Minister did not push for a vote on military action when Parliament was recalled, as I would have been forced to vote against it. However I did vote in favour of the Prime Ministers motion last night because it did explicitly call for more time for UN investigations and developments within the UN Security Council. It also underlined the need for every effort to be made to secure a UN Security Council resolution before any action is taken. Finally the motion included an important caveat binding the Government to a further vote before any military action could commence, which for me, was an essential part of this motion and without it I could not support it.

I by no means want to rush into a military intervention, and would have categorically voted against it if that was what the motion stated last night. I believe we must move forward on a consensual basis and bring Parliament and the country with us on this important matter.”

The motion failed to pass through Parliament and the Prime Minister has accepted the will of the House and has promised to act accordingly.