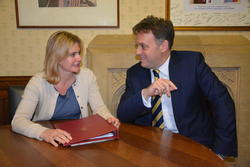 Julian has welcomed the Department for Education’s recent announcement on school funding and described the commitment as “a victory for York’s schools”.

The Secretary of State has set out the Government’s final decisions on the national funding formula for schools. This will come into effect from April 2018 and will replace the current unfair, opaque and out of date funding system that sees each area of the country receive very different amounts of money for no justifiable reason.

This announcement is welcome news for York, historically one of the lowest funded areas in the country, and total funding across York Outer could see a 10.2 per cent uplift over the coming years.

Speaking after the announcement Julian said: “The Secretary of State guaranteed a minimum funding rate earlier in the summer and I am delighted that this has now been confirmed and the national funding formula will be introduced from 2018.

At times, it has felt as though our campaign might falter and there have been a number of delays and necessary tweaks. However, the latest guarantees are positive and I shall be having further discussions with head teachers and City of York Council in coming weeks

This reform has been a long time coming and will make a real difference to many schools in York. Initial proposals suggested that a small number of schools in my constituency would be losing money; thankfully the Government has listened to the recent consultation and this is no longer the case.”