I am saddened by the announcement that Minster FM is to be absorbed into ‘Greatest Hits Radio North Yorkshire’ after acquisition by Bauer Media, and fear this means the loss of a distinctive local institution. I have always enjoyed my appearances on Minster, and believe it has made a valuable contribution to the cultural life

Julian has thrown his weight behind City of York Council’s bid to the Government’s...

Julian appeared on this morning’s edition of Farming Today on Radio 4 to talk... 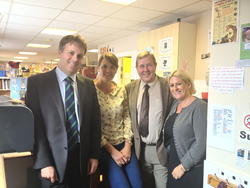 Julian has welcomed the Department for Education’s latest offer to York nursery providers for the free 30-hours pilot scheme commencing this September.

The latest funding deal for York nursery providers will offer them a combined rate of £4.00 per hour over all thirty hours in comparison to the £3.38 they currently receive for providing fifteen free hours of early years provision.

Julian has held discussions with Mr Sam Gyimah, Minister for Childcare and Education, nursery managers in York, and the City of York Council to ensure that the pilot can take place from September and is encouraged by the Department for Education’s positive response.

The viability of the pilot scheme has been brought into doubt in recent weeks as an overwhelming number of nurseries in York made clear that they could not continue their operations unless there was improvement to the funding rate being offered.

Julian said: “I am pleased that the Department for Education has listened to the serious concerns that have been raised and have now returned to the table with a fairer offer for York’s nurseries. I was deeply concerned that many York nurseries indicated they would be unable to take part in the pilot and this was a great disappointment for a large number of parents.”

“For too long childcare and education in York have suffered from unfair funding arrangements and whilst this offer is a step in the right direction, I shall continue to speak with Ministers and the Department to ensure that parents and children in York get a fairer deal beyond this trial scheme.”

Vanessa Warn, owner of Little Green Rascals and Deputy Chair of the National Day Nurseries Association York Network commented: “I am delighted that the DFE heard our Network members and have offered a rate that is better for nurseries and parents.  At the end of the day we want to be a part of the 30 hour pilot to ensure its success and to learn each step of the way with valuable lessons before it is rolled out in 2017. There is more work to be done but this a positive start”.

It is still down to individual nursery providers to opt into the pilot scheme for the next academic year and it is expected that each will be announcing whether they will accept this latest deal in the coming weeks.