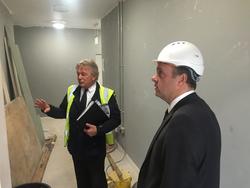 The Prime Minister will today announce that a temporary rule introduced in May 2013 allowing builders to convert disused offices into homes without applying for planning permission will be made a permanent change – a move welcomed by local developers and Julian.

Last month, Julian toured the Halo development in Clifton Moor with John Reeves, owner of the Helmsley Group who are converting the empty office space in to low cost market housing for first time buyers.

Julian is a strong supporter of the development, hailing it as an innovative solution that would help York to meet more of its housing requirements on vacant or under-utilised land, relieving some of the pressure on the communities surrounding the city.

The Permitted Development rule, which allowed developers to convert office space into residential properties without the need of applying for planning permission, had been due to lapse in May 2016. After being approached by Mr Reeves, Julian had written on two separate occasions to the Planning and Housing Minister, Brandon Lewis MP, calling for the arrangement to be renewed amid rumours that some London Councils were instead lobbying for it to be scrapped.

“It is important that those areas that are concerned about the future provision of office space should continue to be able to apply to opt out of these rules and it must reflect the diverse regional and local situations. However, I am absolutely delighted that the Government has decided to make these permitted development rules permanent. It is clear from visiting the Halo development that these reforms could be hugely beneficial to the City of York in helping to meet more of our housing requirements on brownfield land.”

“This is exactly what York and other parts of the UK need to keep the supply of housing coming. We have, as everyone knows, a crisis in the supply of housing in all sectors and the long term solution is to increase supply. This will get rid of the uncertainty and help to enhance supply still further which has to be good news. Now all we need is the ability of those first time buyers to get a mortgage they can live with and afford. ”

Pictured: Julian with John Reeves on their tour of the Halo development last month.