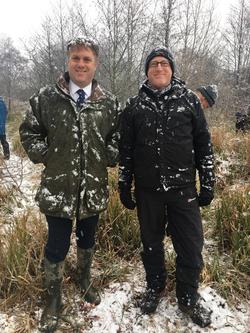 Julian has welcomed the news that City of York Council have recommended refusal for the proposed development site on the land south of Moor Lane which included up to 516 properties, a sports pavilion, a local centre and associated landscaping.

Writing to all residents on Moor Lane last December, Julian made clear his strong objections to this resubmitted application on a greenbelt site and actively encouraged residents to submit their own comments on the proposal.

Julian has also met with the Yorkshire Wildlife Trust (YWT) on multiple occasions to discuss the wide-ranging environmental impact this development could have on the iconic nature reserve if it were to go ahead.

In particular, when Julian recently met with Rob Stoneman, Chief Exec of YWT at Askham Bog SSSI they talked about how the land north of the Bog in which the development is proposed plays a critical role in the unique ecology and hydrology of the reserve and how any development on this land could disturb the sensitive local water table which the diverse nature and wildlife at this site rely on.

In addition to the significant environmental impacts, Julian is clear that the proposals would undoubtedly put a great strain on the existing amenities in the area, such as the local transport network and the number of school places available.

Commenting on the news Julian said, “I am absolutely delighted that City of York Council have recommended this controversial development for refusal after taking on board the strength of feeling on the proposal.

The overwhelming response from local people has been astounding with nearly 8000 objections submitted in total and it is great that their views have been properly heard. I will continue to do everything I can to ensure this exceptional site for wildlife is protected from inappropriate development on the greenbelt “.

The application is scheduled to go to the planning committee on Thursday 11th July.