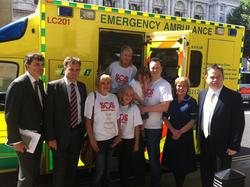 The decision comes just days after Julian wrote to Mr Hunt to reiterate the very strong case for keeping the Leeds Unit open. Mr Sturdy has been working with a number of fellow MPs from the region and the Save our Surgery campaign group, to try to ensure the Leeds Unit would stay open, after the Joint Committee of Primary Care Trusts’ Safe and Sustainable Review proposed to close the Unit down last year.

“I am really pleased to hear that the Leeds Unit will not face closure in the near future and this controversial review has now been suspended. I am sure it will come as a relief for all those who care passionately about keeping this Unit open and those who have been campaigning tirelessly in support of all the fantastic work which happens every day at the Unit.

“However, the story isn’t over yet and there remain a number of questions to be answered on what will happen to the Leeds Unit in the future. I support the principle of fewer Units with greater expertise, but what I will be pushing for over the coming weeks and months is a fair and evidence-based decision making process on which Units should be kept open. What we desperately don’t want is another shambolic repeat of the controversial JCPCT review, which placed a very dark cloud over children’s heart surgery in Leeds and caused a great deal of concern among those whose family members were being treated there. We must also not forget the staff, who do an amazing job in caring for the patients day after day and whom, I am sure, the past year will not have been easy for.”

In the House of Commons, in response to the statement, Julian welcomed the Secretary of State’s decision but suggested that any new review should recognise that Units with paediatric and maternity services located on a single site offer optimum patient experience.

Pictured: Julian with fellow MPs and Save Our Surgery campaigners in Westminster