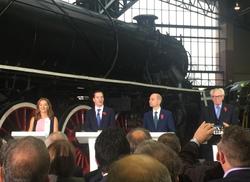 Julian has welcomed George Osborne’s visit to York today to announce the launch of the new National Infrastructure Commission and the investment of £100bn this Parliament to support its recommendations.

Speaking alongside the new Chair of the Commission, Lord Adonis, as well as Lord Heseltine, the Chancellor said that Britain needed to recover from the ‘disease of short-termism’.

Mr Osborne launched the Commission at the National Railway Museum and used the setting to make the point that Britain needed a long term plan to improve our infrastructure, as we did during the railway boom of the 19th Century.

“I am delighted that the Chancellor chose York’s National Railway Museum to launch this hugely important Commission. There could not have been a better setting to highlight the key role Britain has played in the past in developing infrastructure, not just in our own country but across the world, and how we must learn from the innovators in our history.

“Sadly, successive Government over the past few decades have failed to adopt the long term approach that is clearly needed and I’m delighted that the new Commission, backed up by £100bn investment from the Government, will seek to put this right.

“The Commission will play an absolutely pivotal role in helping to shape the Northern Powerhouse and I welcome the fact that the Chancellor has already set northern connectivity as one of their three key priorities to investigate.

“As the Chancellor said, infrastructure isn’t boring or obscure, it affects people in almost every aspect of their day to day lives, right from getting into work to the speed of their internet connection. We must be bold and build a Britain that is fit for the future.”

Pictured: The Chancellor with Lord Adonis and Lord Heseltine launching the Commission