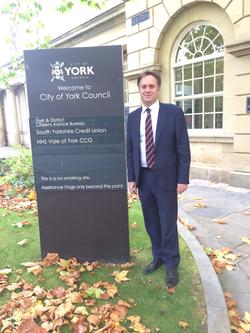 Julian has warmly welcomed the approval of the transformative £650 million York Central development by the City of York Council on Monday night.

The project will see up to 2,500 homes and 86,600 square metres of office space built on the brownfield site behind York railway station. This is one of the largest regeneration sites in the country.

The application will now be considered by the Secretary of State before a detailed planning application, with designs for the homes and offices, is submitted to the council.

York Central Partnership says work is scheduled to begin at the site later this year, with housing and commercial property being built from 2020 and the development completed in 15 years.

In light of the Chancellor’s Spring Statement announcement, Julian very recently spoke up in the Commons to ask for clarification from the Government on the progress of City of York Council’s £77 million application to the Housing Infrastructure Fund (HIF) to unlock the York Central site for redevelopment. Andrea Leadsom, Leader of the House, confirmed that the Government would announce further allocations for the HIF in the Budget later this year. This funding will be vital to help deliver the necessary infrastructure to support such a transformative new site and it is great that the Government is looking to invest in projects like this across the regions.

Commenting on the news Julian said, “I am delighted that such an ambitious scheme has been approved at this stage. The York Central site is brimming with potential and provides massive opportunities for our great city. This is one of the largest city-centre brownfield sites in Europe and it will deliver high spec office, leisure and retail space, with direct access in to York Station, as well as over 2500 homes.

The development of York Central will make a vital contribution towards the city’s long-term housing needs, including some much needed affordable housing, and do so in a way that does not add further pressure on the precious York greenbelt.

It is key that high quality infrastructure brings this project together and I will continue to push the Government to make further progress on the Council’s bid to the HIF.”