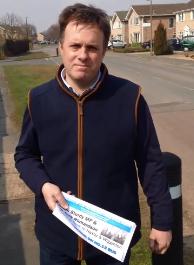 Julian is to host a public meeting to discuss with residents their concerns about bus services in Haxby & Wigginton and particularly the No.13 service, which has been through some controversial changes in recent months. Also present at the meeting will be a group of senior representatives from First, who operate the buses in the area.

The meeting will take place at 4pm on Friday 19th April at the Haxby Methodist Church Hall. One and all are welcome to come along and raise their concerns directly with First.

To watch Julian talking about the upcoming meeting, press play below.