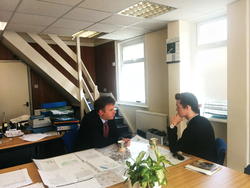 Julian has been campaigning for a fairer funding formula ever since his election in 2010 and has raised the matter both in Parliament on numerous occasions, and with the Secretary of State for Health, Jeremy Hunt, and the Chief Executive of the NHS, Sir David Nicholson.

The problem is that North Yorkshire and York receive less funding per capita because the current NHS funding formula awards additional funds to areas with higher levels of social deprivation. Whilst health needs are generally greater in more deprived areas, the current funding formula provides too great a weighting for deprivation, and insufficient weightings for older people and in respect of the additional costs of providing health services in more sparsely populated rural areas.

Speaking in his constituency office on Ash Street, Julian Sturdy said “Myself and my office were dazzled by Alfie’s talents as an illusionist and it was immediately clear to us that he is destined for great things following his place in the Britain’s Got Talent final in 2012. As such, I am thrilled to be able to join with Alfie to help raise awareness for this important issue. It is wrong that we continue to be short changed by a funding formula that amounts to nothing more than a postcode lottery. Current health funding for York overlooks the needs of older residents, which is particularly problematic as North Yorkshire has one of the highest levels of over 85’s in the country.”

“Further consideration should also be given to people who live in our more rural communities surrounding York. At the moment senior NHS management do not seem to appreciate the additional costs involved with longer ambulance journeys, greater distances for health professionals to travel, and the need to provide a greater number of smaller but more accessible hospitals in rural areas.”

Britain’s Got Talent finalist Alfie G. Whattam, from Rawcliffe, works closely with York Hospital’s fundraising team and regularly appears at their events, helping raise thousands of pounds in the process. He said “For the past few years I’ve been performing professional magic at private parties, events and most famously as a Britain’s Got Talent YT finalist. Part of this entertainment involves charity shows, which I perform regularly at York Hospital fundraising events. In an effort to raise further capital for such an important cause, myself and Julian have decided to team up to show both of our relentless support to this campaign. As a current Economics student at the London School of Economics & Political Science UOLIP, I can see first-hand just how crucial raising this additional finance is. Put simply, Julian’s plan for a better quality health care system works: it’s now up to us to put these ideas into practice.”