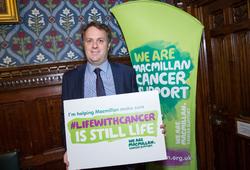 On Wednesday the 18 October, Julian showed his support for Macmillan Cancer support by attending a World’s Biggest Coffee Morning event in Parliament. The occasion marked the launch of a new report, ‘Am I Meant to Be Okay Now?: Stories of Life After Treatment’, that focuses on the challenges faced by people after cancer treatment ends.

Following the tremendous success of Macmillan’s biggest fundraising event of the year on the 29 September, which saw thousands of people coming together across the country to raise money for Macmillan, the charity hosted a Parliamentary Coffee Morning at which MPs and Peers had the chance to meet with and hear from people living with cancer who were featured in the report.

Julian attended the fantastic event in the Commons and said, “I was really pleased to have the opportunity to attend this event in Parliament. This year’s Coffee Morning provided a really important opportunity to hear more about the physical and emotional challenges that people face once their cancer treatment has ended. It was also great to learn more about the work Macmillan is doing to help support people affected by cancer”.

In 2016, Macmillan raised over £29.5 million from the World’s Biggest Coffee Morning and it is currently Macmillan’s biggest fundraising event of the year – and there is still time to get involved. For further information, please visit: www.macmillan.org.uk/coffee