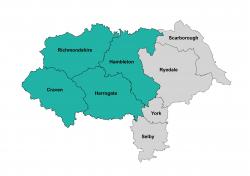 After months of preparation, today the plans for an East-West model for North Yorkshire devolution were formally submitted for consideration by the Ministry for Housing, Communities and Local Government.

The bid has broad support from businesses across the region, including Hudson Moody estate agents, Browns of York department store, web development agency Netsells, and the Bettys and Taylors of Harrogate group.

Julian provided an official letter for support for the submission and will continue to work with regional leaders to guide the submission through upcoming stages of consideration.

In his letter, Julian commented:

“Dividing the mayoral area into two local authorities of comparable size and economic heft, will create the balanced political structure that is lacking in other proposals. The retention of the current City of York unitary authority alongside a new unitary authority in North Yorkshire would go against the Government’s own policies on population size and geographical area covered. There is also a very real concern in York that the city could be left as the junior partner in a regional authority that would prioritise the more rural parts of the county.

Since the creation of the City of York unitary authority in 1996, the council has seen a change in political control at every single election. This has been to the detriment of long term decision making, resulting in uncertainty around the council’s commitment to ongoing local infrastructure projects and delays to the submission of an agreeable Local Plan. Our adult social care and children’s services, already under pressure, will benefit from the additional scale and capacity that a unitary authority will bring. Annual budget efficiencies from the East-West model are expected to be £33-56 million in total.

For York, the reorganisation presents an opportunity to strengthen existing links with the surrounding area and to push for mutually beneficial investment in and around the vital A64 transport artery. Our thriving tourism industry in the city centre will complement rural and coastal tourism in the North York Moors and Scarborough and Whitby.

Fundamentally, I believe the East-West model is the only solution that will get the balance right between creating authorities that have the scale and capacity to invest in improved services, whilst being small enough to remain accountable to local people. Two equal partners will complement the mayoral combined authority, creating a balanced political structure and spreading investment evenly around the county.”

Further information regarding the East-West model can be found here: https://www.get-change-right.com/