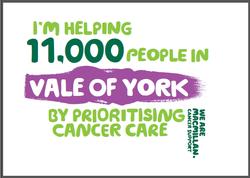 Julian is supporting MacMillan’s Cancer Action Day and has praised York health services for providing one of the best patient experiences in the country.

Macmillan are calling on all political parties to commit to improving cancer outcomes so they start to match the best in Europe by the end of the next Parliament. The Conservative Party also aims to make cancer survival rates the best in Europe, and the NHS now saves an extra 5,000 lives a year from cancer than it used to.

Supporting Macmillan’s campaign, Julian said “With three people being diagnosed with cancer in Yorkshire every hour, it is more important than ever that we all work together to improve cancer care in York.

“It is fantastic news that 92% of patients in the Vale of York now rate their overall care as being either excellent or very good. Having visited York Hospital on many different occasions, I know from my own experience how hard our doctors and nurses are working to provide patients with the best care possible.”

The NHS budget has been increased in real terms every year since 2010, and the Prime Minister has announced that the budget will increase by a further £8 billion over the next five years.