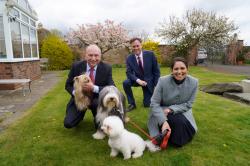 Following months of lobbying and campaigning, Julian Sturdy MP was encouraged yesterday as the Secretary of State for Justice, Robert Buckland QC MP, signalled that efforts from a growing number of MPs to introduce harsher sentencing for pet theft and animal related crimes have been recognised by the Government.

Ahead of the third reading of the Police, Crimes, Sentencing and Courts Bill, Julian signed New Clause 16 which was tabled by his Conservative colleague Sir Iain Duncan Smith MP in an attempt to introduce a new offense for stealing pets, separate from property theft. This is to recognise the importance of pets in our lives with domestic animals being like family to their owners.

While the individual amendment was not brought forward to a vote, the Secretary of State for Justice acknowledged the efforts of MPs supporting New Clause 16 stating:

“On pet theft, it is vital that the underlying seriousness of this type of criminality is fully reflected by the law. That is why, since its launch on 8 May, the pet theft taskforce has been working to look at the wider issues…As a pet owner myself, I understand the depth of feeling that exists. I am able to say in the strongest terms that we will act to drive out this pernicious crime. His new clauses address some of the issues at the heart of where we will take action. I give him, and others, the assurance that it is our intention to make any necessary changes to this Bill in the Lords before it returns to the Commons once we have finalised the detail of exactly what is needed, using a range of powers, including primary legislation. The effect of these changes will, I believe, help to achieve what he and other hon. and right hon. Members are seeking to achieve today.”

The cross-department pet theft task force has been set up by the Home Office, Ministry of Justice and Department for Environment, Food and Rural Affairs to investigate a rise in pet thefts and to recommend any necessary measures to tackle the problem. According to DogsTrust, the price for five of the UK’s most sought-after breeds grew significantly during the first lockdown with the price of some breeds rising by as much as 89%. Google searches for ‘buy a puppy’ increased by 166% in the months between March and August following the start of lockdown last year. Unfortunately, criminals are seeking to take advantage of this trend hence the rise in pet thefts.

In April, Julian welcomed the Home Secretary, Priti Patel MP, and the then-Conservative Party candidate for North Yorkshire Police, Fire and Crime Commissioner, Phillip Allot, to a kennels in Murton outside York to discuss tougher sentences for pet thefts. Julian has also submitted parliamentary written question on pet thefts to ensure it remains on the agenda of Ministers.

As a member of the Environment, Food and Rural Affairs Select Committee, Julian has also been working on a range of animal welfare issues including assessing efforts to tackle puppy smuggling and holding a public review on the Animal Welfare (Sentience) Bill to ensure it is effective. In 2016, Julian received the Arthur Broome award from the RSPCA for outstanding contribution to animal welfare for successfully guiding his Private Members Bill the Control of Horses Act 2015 through Parliament.
Speaking after the debate,

“After much lobbying, it is great to receive assurances from the Secretary of State today that our lobbying efforts have been recognised by the Government and that the necessary amendments to provide tougher sentences for pet thefts will be introduced in the House of Lords.

This is an important issue for the many families in York who love their pet and are understandably worried by the growing trend in animal thefts. I know that my dog Diesel is a part of the family and I would be distraught if he was a target of criminals.

I will keep a close eye on the progression of the Bill in the Lords to ensure the amendments tabled by the Government address the issue and provide a robust deterrent to deter criminals.”