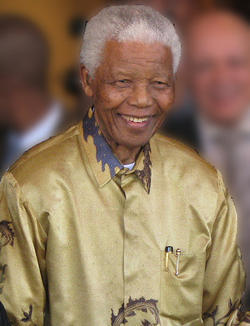 “I was deeply saddened to learn of the death of Nelson Mandela, the former President of South Africa who was awarded a Nobel Peace Prize for his successful struggle against apartheid. Mr Mandela, the first black president to be elected in a fully representative and democratic election in South Africa, was an inspiration to millions around the globe for his work in tackling institutionalised racism and poverty, and the promotion of peaceful reconciliation.

“On a personal note, I was in South Africa in 1995 for the Rugby World Cup and it was inspirational to see how he embraced a sport and the springboks shirt that, for so many years, stood for everything he fought against. My thoughts go out to Mr Mandela’s family and the people of South Africa who have lost ‘the father of the nation’.”