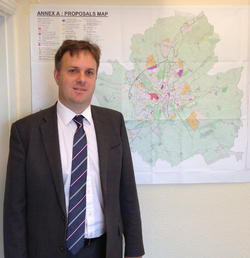 “I welcome the proposed removal of the Dunnington and Huntington Travellers Sites, but I’m disappointed it’s taken this long for the Council to come to its senses on these proposals. Since the Local Plan was first announced a year ago, these communities have been protesting on the obvious grounds of the harm to the greenbelt and the open countryside and yet it’s taken a year of torment for the Council to realise that residents were right all along.

“But disappointingly, the Council have not applied the same logic to the new 7 pitch Traveller Site proposed in Elvington. Doubtless the residents there will be up in arms about the impact of the new proposals on the village and I will be doing all I can to get the Council to see sense.

“On the whole, I fear that the amendments put forward by the Council in the Further Sites document show very clearly that they have not listened to the strongly expressed views of the people of York and its surrounding communities. The changes are largely inconsequential to the Local Plan as a whole, which will still see thousands of acres of greenbelt land concreted over and the City’s infrastructure vastly outpaced by the scale of development being proposed. Needless to say I will continue to campaign for real change to bring about a sustainable Local Plan for York, that will protect its heritage and its beautiful countryside surroundings.”

To view the Further Sites Consultation document in full, click here or for further information on the upcoming Local Plan Working Group meeting and the other agenda documents, click here.

Summary of the Key Proposals:

Withdrawal of Dunnington and Huntington Traveller Sites and Knapton Showpeople Site.
Extension of Elvington Showpeople Site from 1 to 3 pitches and create a new 7 pitch Traveller Site in Elvington, south of Elvington Lane and the Medical Practice.
Addition of dedicated greenspace to several sites including Whinthorpe, Clifton Gate, Land to the North of Haxby, Land to the East of Metcalfe Lane and the Land at New Lane, Huntington.
Addition of new housing sites north of Stockton Lane, south of Boroughbridge Road, north of Escrick and at Connaught Court, Fulford.
Addition of new sites ‘safeguarded’ for long term future development east of Earswick, at Intake Lane, Dunnington, north of Elvington, north of Escrick, at East Field, Wheldrake.
Addition of new sites for solar farms at Knapton Moor and on land Northwest of Stockton Hermitage.
Addition of site between Askham Bryan water tower and the ring road for a ‘Compressed Natural Gas Station and Freight Consolidation Centre’.