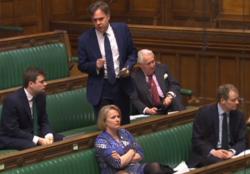 This afternoon, Julian has pressed the Secretary of State for Health, Matt Hancock on Public Health England’s response following Friday’s news that the first two UK coronavirus cases have been confirmed in York.

The patients have since been removed from the city to a specialist diseases unit in Newcastle, and no further cases have been identified over the weekend. The risk to those living in and visiting York has been assessed as low.

One of those infected has been confirmed as a University of York student, but the authorities have stated that they were not present on the Heslington campus or in student accommodation for the period before or after they were exposed to the virus.

Public Health England has been moving rapidly to identify everyone in York who may have had close contact with the two patients, and has put in place firm anti-infection measures across the city, in cooperation with City of York Council and the Department of Health.

During the Health Secretary’s statement to the House of Commons earlier today, Julian asked for a precise timeline on how long the process of locating everyone who may have had contact with the two infected people will take, so that local residents can be reassured that the situation is moving to a conclusion.

The Health Secretary replied that progress was rapid, and in total will not take more than a few days. He has also promised to keep Mr Sturdy informed on developments.

After leaving the Commons chamber, Julian said: “The situation is being handled well by the authorities, but I felt it was important to stress to the Health Secretary that York residents want to be reassured as to progress, and to have some clear indication that things will soon return completely to normal.

I am glad Matt Hancock and his ministerial team has promised further updates, and I will stay tightly focused on this over the coming days.

Given the low risk and the comprehensive official response, it is important that normal life goes on in York, and I was very glad to see that the Ice Trail sculpture event went ahead as planned over the weekend.”