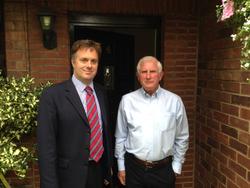 Julian has recently met with a group of residents from Trenchard Road and Portal Road off the A59 on the outskirts of York, to discuss their concerns over the proposed development of nearly 1500 houses in the immediate vicinity.

He met with several members of the committee of the York (Trenchard) Residents Company Limited at the home of their Chairman, Martin Wistow. The Company is responsible for the management of a piece of common land which separates the two streets from a 14.5 acre block of land recently proposed for 161 new homes in the Local Plan Further Sites recommendations. On the immediately opposite side of Boroughbridge Road is the Civil Service Sports Ground site and the British Sugar site, which together propose a further 1235 houses.

The residents expressed to Julian their very serious concerns over the inability of the local infrastructure to cope with the scale of development put forward, particularly the road and drainage networks and the current under provision of local services and facilities, such as schools and community centres.

It is the site which borders the Residents Company’s land which had generated by far the most opposition, as, unlike the other two sites, it is still very firmly within York’s greenbelt. The residents and Julian agreed that this particular proposal for 161 new houses perfectly represented the type of urban sprawl which the land’s current greenbelt status is supposed to restrict.

Julian said: “It was a real pleasure to meet with local people and discuss the very valid concerns they have over inappropriate and unsustainable development in their area. These are people who know the local area well and are passionate about protecting their small community from being subsumed by urban sprawl. They absolutely accept and support the need to develop key brownfield land, like the British Sugar site, but they understandably draw the line at the Council’s policy of recklessly concreting over the greenbelt.

“This 15 acre plot off Boroughbridge Road serves the extremely important purpose of protecting the character and setting, not just of our great city but also our smaller suburban communities, like Trenchard and Portal Roads, as well as restricting urban sprawl and promoting urban regeneration. Proposing such profitable and easy to deliver greenbelt land so close to the much more challenging British Sugar site is, to my mind, an affront to common sense on the part of the Council and it suggests that they may not be as serious about getting the British Sugar site going as they would have us believe. I have assured the residents of my determination to represent them to the very best of my ability throughout the Local Plan process.”

Company Chairman, Martin Wistow said: “The residents of Trenchard Road and Portal Road are extremely grateful for the support shown by Mr Sturdy to our concerns about the damaging impact the York Draft Plan would have on our local community. The Council’s blatant and inexplicable dismissal of greenbelt land protection laid down in the National Planning Policy Framework has been of particular concern, as has the lack of infrastructure to support the size of the proposed developments. That Mr Sturdy offered to meet us to discuss our objections to the to the plan and to the use of greenbelt land is significant and we are very pleased to have the backing of our Member of Parliament when we submit our immediate and future responses should the Council continue to promote such a poorly considered plan for our local community.”