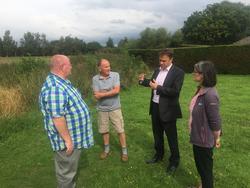 Julian has met with a group of local residents from the Avon Drive area of Huntington, to discuss their concerns over plans for 109 homes on the greenbelt immediately north of the community.

He has already joined over 50 residents in formally objecting to the proposal, highlighting the land’s status as greenbelt, as well as several other issues surrounding the ability of local infrastructure to cope with the scale of development. Several residents have complained about the poor drainage situation in the field, which has caused gardens to flood and in some cases, the sewage system to back up. In addition, there is a fear that the development will become an obstacle to expanding the northern ring road once adequate funding is found.

More recently, representatives of the applicant (Signet Planning Ltd) have submitted a detailed letter arguing against the land’s designation as greenbelt and Highways Officers from the Council have ruled out the need for more than one access point to the development, reinforcing local residents’ fears about increased traffic and rat-running.

The application is likely to go to planning committee in October, but in the meantime Julian has vowed to continue working with residents to fight the proposal. He is writing to the Council’s Planners to raise further questions over the access issues and he will be submitting further objections in response to Signet Planning’s letter.

“It was a real pleasure to meet with local residents and to discuss their very real concerns in detail. Despite whatever the Planning Agents may say, the land in question is greenbelt and to my mind, no exceptional circumstances have been displayed to warrant its approval. But even excluding the greenbelt issues, there are many reasons to refuse this application and I hope to see a strong rejection from the Council in the coming months.”

“The meeting with Julian Sturdy was very useful and constructive, it allowed us to discuss some of the many concerns raised locally relating to the proposed development.  This land is a greenbelt site which is home to much wildlife and must be protected. There are many issues relating to drainage, access points, traffic and general road safety. Healthcare & education facilities, air quality, noise and light pollution are all concerns to residents which must be considered.”

Pictured: Julian with local residents David Trayhorn, Roy Brown and Jane Rhodes on the proposed access to the site.