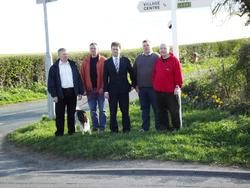 Julian has today written to Eric Pickles MP, the Secretary of State for Communities and Local Government, to ask him to reform planning policy to give communities and individuals greater power to stop wind farms from getting the go ahead. The move follows the publishing of the City of York Council’s draft Local Plan, in which they have outlined over 40 sites as ‘potential areas of search for renewable electricity generation which includes commercial wind and hydro’.

Julian, who has for a long time been openly critical of wind farms and their questionable eco-credentials, wrote in his letter to the Secretary of State that he and many of his constituents have ‘grave concerns’ over the scale and quantity of the proposed sites within the Plan, which he says cover ‘thousands of acres of traditionally Greenbelt protected land’.

Julian also explained that he has ‘significant reservations’ about the Council’s intentions to act on the views of residents following the eight week consultation process, which is set to begin today. ‘Sadly,’ he writes, ‘I fear my constituents will be powerless to stop the Council from encircling the City in wind farms, unless the government steps in to strengthen planning policy giving communities greater power to oppose them.’

On his letter, Julian said:

“As someone who is widely known to be sceptical of the relative benefits of wind farms, it goes without saying that I am extremely concerned and alarmed by the scale and quantity of the proposed renewable energy sites within the Plan. I am also incredibly frustrated by the Council’s complete failure to notify those residents who will be immediately affected by the plans, which, in the case of my constituency, includes just about everyone. As with the proposed Traveller and Show People sites, the details of the Council’s renewable energy proposals have been slow to achieve the exposure they deserve. Indeed, the proposals seem to resemble the small print on a contract, especially when compared to the Council’s monstrously over-ambitious and completely unsustainable housing targets.

“If the Council are willing to announce their plans for housing developments, travellers sites and wind farms on residents’ doorsteps without even notifying them, then I have very little faith in their ability to carry out a thorough and inclusive consultation process and to act on the views of residents who take part in it. That’s why I feel it is so important to alert the government to what is going on in York and to lobby the Minister to give local residents more power to stop the Council in their tracks.”