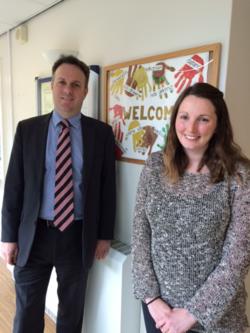 As part of an awareness raising campaign funded by the North Yorkshire Police Crime Commissioner, local domestic abuse charity IDAS (Independent Domestic Abuse Services) invited Julian to visit their refuge in York to find out more about the vital work they perform in the local area.

In 2015, IDAS received over 1150 referrals into its services for people affected by domestic abuse in York and the surrounding area. Over 3500 referrals were taken from across the county and over 100 people were provided with refuge accommodation. North Yorkshire Police reported that incidents of domestic abuse increased last year with over 9000 reported to them.

IDAS support people to make informed choices to help them move on from domestic abuse. Domestic abuse can be emotional, financial, sexual or physical and affects people regardless of their age, background, social status or sexual orientation.

“We are pleased to have the support of our local MPs in York to help us to raise awareness of domestic abuse. Many people think of domestic abuse as a hidden issue but it is important that we inform people about the signs so that they know when and where to get the help that they need. We wish to thank Julian for his continued support.”