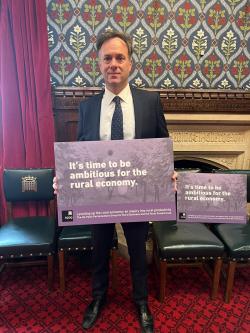 Julian has led over 30 cross-party MPs and peers in writing to the Prime Minister requesting new plans to unleash the economic potential of rural regions like North Yorkshire are included in the forthcoming Queen’s Speech.

Last week the All-Party Parliamentary Group on Rural Business, which he chairs, launched a comprehensive report based on its year-long inquiry into the health of the rural economy, which took evidence from over 50 expert witnesses. Although 23% of all English businesses are based in the countryside, there is a productivity gap of 18% between rural areas and the national average, the ending of which could add a further £43 billion to the economy each year.

The report urges the government to be more ambitious in securing the future prosperity of rural Britain. It makes 27 policy recommendations Ministers could take up to boost growth in rural communities, including on tax, broadband and mobile coverage, skills training, planning, and government practices.

The Queen’s Speech on 10th May will set out the government’s proposed new laws and policies for the next session of Parliament. Julian’s letter urges Boris Johnson to take this opportunity to commit to implementing the report’s recommendations, through including them in a new government proposals document (a ‘White Paper’) on the rural economy as part of the Speech.

After writing to the Prime Minister, Julian said: “Countryside regions like North Yorkshire are home to some of the most hardworking and enterprising people in the nation, but have remained persistently less productive than urban areas under governments of all parties.

This untapped potential reflects factors like more limited access to the latest digital infrastructure, and the need for training, planning and taxation structures to properly reflect the needs of rural areas, not just cities.

The Group’s recommendations are practical and low-cost, and I thought it was vital to bring these to the Prime Minister’s attention and press for action right away. The fact I have been joined by Commons and Lords colleagues from the Lib Dems, Labour and Plaid Cymru shows the strong cross-party view that steps need to be taken immediately to guarantee a more prosperous and dynamic future for rural Britain, sustaining the communities and landscapes that are such an important part of the fabric of our national life.

I want to see a solid response from the Prime Minister, and a commitment to act on our findings in the Queen’s Speech and beyond.”