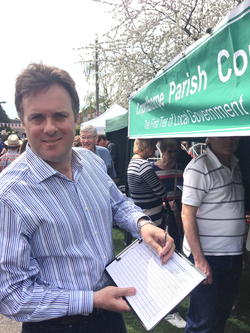 Julian has launched a constituency-wide petition calling on Parliament to change the law to ensure only English MPs are allowed to vote on English-only laws.

The move comes after a ‘No’ vote in the Scottish Independence referendum re-ignited debate over the so-called ‘West-Lothian’ question on whether MPs from Northern Ireland, Scotland and Wales should be entitled to vote on matters only affecting England.

Julian is a strong supporter of the ‘English votes for English laws’ campaign, commenting following the Scottish Independence poll: “what the referendum has done is open up a wider debate in the UK on devolution and for me what is paramount is that it is absolutely fair to everyone.”

The Fair Votes For All petition which Julian has launched across his York Outer constituency calls on Parliament to create “fairness in the devolution settlement by ensuring decisions having a separate and distinct effect on certain countries of the United Kingdom, are decided only by the Members of Parliament elected to represent these particular countries.”

“William Hague, in his role as Leader of the House of Commons, has been doing an excellent job in trying to find a long overdue answer to this hugely important constitutional question. However, I’ve been disappointed that the Labour Party seem to be dragging their feet and avoiding any discussion on the matter, even snubbing an invitation to a Cabinet Committee.

“My hope is that this petition, which will be mirrored in many other parts of the country, will help to galvanise popular opinion, forcing the other parties to put party political expedience to one side and do what is fair and right for all constituent nations of the United Kingdom.”

Petition sheets can be downloaded by clicking here or upon request by email to julian.sturdy.mp@parliament.uk. Once completed, they can be returned FREEPOST to Julian and will be presented to Parliament shortly after the return deadline of 16th February.

Please note, due to Parliamentary protocol, this petition is not available online as an e-petition.