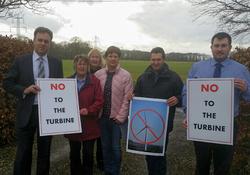 Julian has launched a campaign to end the current system of taxpayer funded subsidies to onshore wind farms.

As the law stands, funds for what Mr Sturdy feels are ‘otherwise uneconomic’ wind turbines are draining resources from other more practical forms of renewable energy. Mr Sturdy has claimed that solar panels on people’s roofs and offshore wind farms out in the North Sea have the potential to generate far more green energy and can do so in a way that does not harm York’s surrounding countryside, which should be preserved for future generations. Further investment in also needed in other exciting areas of renewable energy generation such as wave and tidal energy, which have yet to be commercially exploited on a large scale.

Mr Sturdy’s campaign invites local residents to pledge their support for an end to onshore wind subsidies, after the Prime Minister David Cameron announced his intention to scrap them within six months after the election. The campaign has been launched following the defeat of controversial plans for a 78m wind turbine at Kexby on the outskirts of York. Mr Sturdy had been campaigning against the turbine, which would have dwarfed even York Minster, every step of the way. Having raised his concerns with planning officers and written to local residents on numerous occasions, keeping them informed at every turn during the process, Julian also spoke out in support of the local community at the planning meeting.

Speaking about the campaign, Julian said “I have previously joined communities in fighting off plans for wind turbines in Copmanthorpe, Wheldrake, the Poppletons and Murton and this latest proposal for Kexby was just yet another example of developers trying to impose their turbines on local communities who simply don’t want them. This is unacceptable and we need to end the current system whereby developers pocket highly lucrative taxpayer funded subsidies and communities are stuck with wind turbines blotting the local landscape.

“There are many exciting opportunities for renewable energy in Yorkshire, particularly in offshore wind and wave and tidal energy in the North Sea, but only if we remove this unfair bias towards onshore wind power. We need a more dynamic and secure energy mix for future generations that focuses on jobs, investment and local communities.”

Pictured: Julian with local ward Councillor, Jenny Brooks, and residents from Kexby, celebrating their successful campaign against the 78m proposed wind turbine on Hull Road in the village.