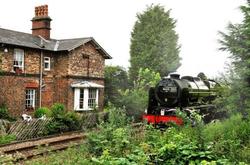 Julian has thrown his weight behind City of York Council’s bid to the Government’s New Stations Fund in a joint effort to secure the funding needed to build a new railway station at Haxby.

In his letter of support for the bid Mr. Sturdy outlined the large catchment that a new station would serve and the positive impact of a train link into York in reducing congestion on local roads.

Mr. Sturdy has also supported a bid submitted by fellow Yorkshire MP, Graham Stuart for funding to explore the reopening the York to Beverley line. If successful, this funding would come from a separate Restoring Your Railways Fund designed to reopen disused lines.

“Earlier this year, the Government invited MPs to submit expressions of interest for funding from the Restoring Your Railways Fund to reopen old railway infrastructure in their local areas. They also opened a new round of the New Stations fund and invited local authorities to submit bids.

Given that City of York Council had already announced their intention to develop a business case to reopen Haxby station, I decided that rather than starting from scratch, the most effective means of securing the funding was to support the council’s bid to the New Stations Fund. I have now submitted a letter of support for their bid and I will do everything I can to lobby Network Rail and the Department for Transport on behalf of Haxby in the next phase.

A longer-term ambition is to reopen the York to Beverly line and I am delighted to be a signatory to an expression of interest submitted by Beverley and Holderness MP Graham Stuart. The Government will announce the next round of schemes to be developed further later in the summer and I hope to see the York to Beverley line amongst them.”