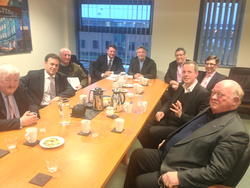 Working with Julian and Conservative Councillors, the group of smaller developers have been campaigning tirelessly against the Council’s affordable housing policy, believing it to be having an adverse affect on local development and economic growth in York. Fearing that their concerns were being ignored by the Council, last week they were given the opportunity to raise these concerns directly with the Planning Minister.

On their recent meeting, the Planning Minister, Nick Boles said:

“Small independent builders and developers are vital engines of growth and jobs in any city. It was great to understand more about the obstacles that they face in the City of York and I am very grateful to the excellent local MP Julian Sturdy for giving me this opportunity.”

John Reeves of the Helmsley Group, who hosted the meeting, said:

“It was great to meet with the Planning Minister and our local MP and Councillors in a relaxed environment where we were able to discuss some of the fundamental issues affecting the supply of housing. In particular, we discussed our concerns over the debatable statistics being used to support affordable housing policy and the proposed new Local plan.”

“While the Council have reduced their affordable housing targets, it is disappointing to learn of the number of building projects in York that remain stalled. To me, it seems absolutely imperative that we get these projects going again. I believe the best way of doing so and making housing affordable in the long term, is to substantially reduce these targets for a period of at least two years. This will give many developers sufficient opportunity to complete their stalled projects and after such time, affordable housing policy could be reviewed again.

“This would undoubtedly have a positive effect on the local economy in York. Sadly, it seems that those who put forward this view are being sidelined by the Council, who seem intent on pursuing unrealistic targets. I’m really grateful that the Planning Minister was willing to listen to local developers in York, even when the Council don’t appear to be doing so.”