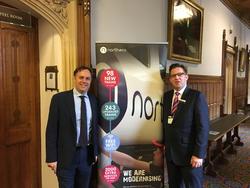 Today in Parliament, Julian hosted a Northern Rail event for Members of Parliament across the north to meet with directors and discuss upcoming developments on the rail network.

Julian was encouraged to hear about upgrades to the York – Harrogate line as the current Pacer trains will be replaced by the end of 2019 with the Class 170 Turbostar, and this process will start next year. Not only will passengers be more comfortable on journeys between York and Harrogate, but journey times will be reduced through the upgrading of passing places and signalling improvements.

The footings for an automated ticket machine have been laid at Poppleton Station and this facility is expected to become fully functional in the coming months. The unit will provide integrated travel information and allow passengers to collect tickets purchased online.

Furthermore, Northern will be running services between York and Scarborough in the future. Julian was encouraged that the company are interested in including Haxby on the line and are supportive of efforts to reopen the village’s railway station.

Speaking after the event, Julian said: “It’s fantastic to welcome representatives from Northern Rail to Parliament and I am glad that there seems to be works in the pipeline that will reduce travel times for my constituents whilst expanding capacity.”