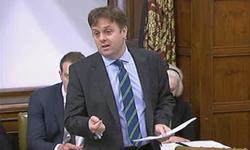 Last week in Parliament, Julian chaired a crowded meeting of farmers, experts and MPs from all national parties as part of an ongoing campaign to review the role of the Groceries Code Adjudicator (GCA).

The Adjudicator oversees an industry that employs 1 in 7 British workers and is worth £177 billion to the national economy, and many producers and charities have raised concerns that its remit is currently too restricted to allow it to ensure fair dealing across the agricultural sector, and right along product supply chains.

The meeting heard evidence from a variety of producers, including sheep, dairy and beef farmers from North Yorkshire, the manager of a plant and flower business, and Kenyan farmer who sells green beans into the UK market. The witnesses explained their experiences of unfair and bad practice encountered when trying to get their produce to market, and the consequences this has for their businesses, and for the sector and the economy as a whole. Substantial contributions were also made to the discussion by the Chairman of the House of Commons Environment, Food and Rural Affairs Select Committee, Neil Parish MP, the President of the National Farmers Union, Meurig Raymond, and the Chief Executive of the Tenant Farmers’ Association.

The meeting was attended by Conservative, Labour and Liberal Democrat MPs, as well as representatives of the Competition and Markets Authority, the various charities involved in the campaign, and the Kenyan equivalent of the GCA.

Julian said “I was very happy to preside over such a productive meeting, and to see the determination to secure a solution displayed by farmers, civil society organisations and MPs alike. This is a cross-party issue all politicians should be able to unite behind. Unfair trading practices reduce competition, discourage investment, and are exploitative and unfair to producers. If they are not tackled we are all affected through worse products, higher prices and poorer communities, and our economy is held back from reaching its full potential”.

“I will be meeting with Ministers at the Department of Business next week to ask what their intentions are on this issue, and will continue to act with MPs of all parties to keep this question at the forefront of the government’s mind.”

The Department for Business, Energy and Industrial Strategy has listened to calls to look again at the role of the Adjudicator, and is undertaking a review to establish whether its remit should be extended. The call for evidence opened on 18th October, and Julian and other parties to this campaign plan to submit the evidence gathered at this meeting as part of this process.