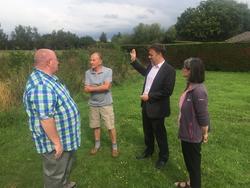 The Secretary of State, Sajid Javid MP, has today dismissed a planning appeal for 109 homes on the greenbelt north of Avon Drive in Huntington.

Julian was a vehement critic of the plans when they were first mooted in 2015. Alongside local residents Mr Sturdy objected to the proposals which were initially turned down by the City of York Council and then a Planning Inspector, before being referred to the Secretary of State.

In his decision the Secretary of State agreed with the Planning Inspector’s assessment of the application, and rejected the appeal on the basis that it would be both inappropriate and harmful to the greenbelt.

The Secretary of State also stated that no special circumstances were demonstrated by the developer that outweighed the harm that would be done to the greenbelt.

Commenting Julian said, “I am absolutely delighted that the Secretary of State has supported the objections of local residents against this speculative and inappropriate proposal for greenbelt development. This decision supports the precedent set in 2015 at Brecks Lane in Strensall that speculative applications for development on the greenbelt can be strongly defended against.

“When the plans were originally put forward I met with local residents on site to discuss their legitimate concerns about the impact that these proposals would have if given the go ahead. Local residents must be commended for their efforts in fighting off this greenbelt grab, and it was an absolute pleasure to work with them throughout this process.”

The Secretary of State’s decision can be found by clicking here.