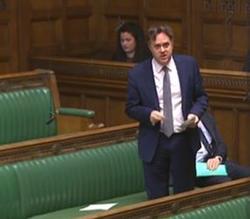 Julian this morning asked Ministers responsible for the ongoing withdrawal negotiations to secure new arrangements that facilitate the migration of scientists and other academic researchers.

In the House of Commons during questions to the Secretary of State for Exiting the EU, David Davis, Julian said:

“Could the Minister reassure me that upcoming negotiations on future migration arrangements with the EU will prioritise the needs of UK science and research, allowing a two-way flow of talent that is vital for our top universities, such as York University in my constituency?”

Responding for the government, Robin Walker, a junior Minister at the Department for Exiting the EU, replied:

“I’m very happy to give my honourable friend that reassurance. We’ve been having some very useful meetings with the science and universities sector, talking about their needs in this respect, and we do want to ensure that the UK continues to be able to attract the brightest and the best from around Europe and around the world”

After speaking in the Chamber, Julian commented: “York University is a world-class institution, and benefits hugely from the contribution of European nationals in science and other areas of academic research, just as Continental universities draw on the expertise of British researchers.

I was pleased to hear the government is committed to maintaining this exchange of knowledge, and will continue to lobby for easy migration arrangements for researchers being prioritised during the exit talks to ensure this is included in the final agreement.”