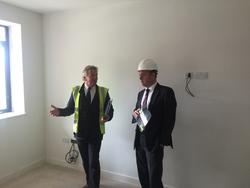 Julian has called on the Government to renew its policy of allowing offices to be converted to residential properties without having to apply for planning permission, following a visit to Helmsley Group’s ‘Halo’ development on Clifton Moor.

In May 2013, the Coalition Government introduced permitted development rights for office to residential conversions for a three year period. This significantly relaxed the planning rules and effectively meant that building work could commence without having to go through a full planning application.

John Reeves, owner of the Helmsley Group, has been using the reforms to great effect in Clifton Moor, where he has been converting some of the many empty office blocks into low cost residential apartments, which start from as low as £100,000. In order to ensure his ‘Halo’ development helps to improve York’s housing situation for young people, Mr Reeves has decided to only offer the apartments to first time buyers for the first six months on the market.

However, several York-based developers, including Mr Reeves, have expressed concerns over rumours that the Government will not renew the permitted development policy in response to concerns that it is resulting in a rapid decline in the amount of available office space in some cities, like London. In response, Julian has twice written to the Planning Minister, Brandon Lewis MP, calling for the renewal of the policy in 2016, whilst also allowing for regional diversity by giving the option to opt-out to those areas that need to.

“It was great to see the fantastic work being done at Clifton Moor to convert long term empty offices into low cost homes for young people. I was amazed to hear that some of the office space at Clifton Moor has never been let since it was first built and this situation simply cannot continue. While ever we have an abundance of empty and underused office space in an area that, due to the congestion on the ring road, is no longer a viable location for many businesses, I want to see these conversions continue without the unnecessary shackles of a bureaucratic planning process.

“As we have seen through the Local Plan process, there are clear obstacles to meeting our housing needs, not least the greenbelt. We need to look towards innovative solutions like this one so that we can try to meet our future housing requirements as much as possible on already developed but vacant or under-utilized land. I will continue to make my views known to the Planning Minister at every available opportunity and I will be looking to meet with him in the coming months to discuss this matter further.”

Pictured: Julian Sturdy MP with the Helmsley Group’s John Reeves, on a tour of the Halo development.