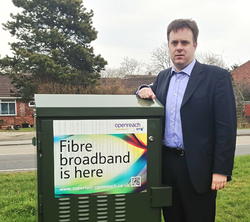 Julian has called on the government to release further funding for the superfast broadband roll out in North Yorkshire.

After securing a parliamentary debate on Rural Broadband in North Yorkshire on Wednesday, Julian used the discussion to praise the government’s recognition of the opportunities for growth that superfast broadband presents. He also celebrated the success of the local roll out, with Superfast North Yorkshire scheduled to achieve the targeted 90% of households receiving speeds of up to 25mbps well ahead of the rest of the Country.

In light of the success and speed of the local roll out and the fact that it may be put on hold in North Yorkshire if it has to wait for the rest of the Country to catch up, Julian called on the Broadband Minister, Ed Vaizey MP, to release the region’s allocation of the next tranche of government funding early so that it could continue it’s good work. This second tranche of BDUK funding totals £250m but it is not yet clear what proportion of this money with go to North Yorkshire.

The experience of some local communities, like Askham Bryan, were also highlighted as having not yet benefitted from the roll out. Julian said they were being left behind by a “deepening digital divide” and he called on the government to provide greater clarity over the future course of the roll out, so that these communities could plan ahead based on “certainties and not possibilities”. He was joined in the debate by fellow North Yorkshire MPs Julian Smith, Nigel Adams and Andrew Jones.

“I see the digital divide first hand in my constituency. Due to the foresight of North Yorkshire County Council, alongside the government’s commitment to invest in our local infrastructure, many communities are already enjoying the benefits of superfast speeds. Over the coming months, many more villages across North Yorkshire will be joining them. However, sadly, I fear that some communities around York and across the County will be left behind by the digital divide because they’re too remote to be included in phase one of the roll out. It is for the benefit of these communities that I called on the Minister to release the next tranche of funding. After all, the Government prides itself on rewarding those who work hard and want to get on. Superfast North Yorkshire has worked tremendously hard, and I hope that the Government will give it what it needs to finish the job.”

Responding to the debate, Ed Vaizey MP, the Culture Minister responsible for the roll out, praised the work Mr Sturdy and his colleagues had been doing to lobby the government on this issue and said that he had been discussing phase two of the roll out extensively with his colleagues over the Christmas period. He hoped to make an announcement on it soon.

To watch the debate in full, press play below and skip to 16.35: