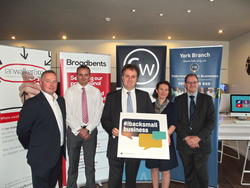 On Monday Julian met with representatives of the North Yorkshire branch of the Federation of Small Businesses to discuss what the next government could do to further assist small businesses.

Julian also pledged his support to the recently launched #ibacksmallbusiness campaign, which highlights the current barriers to growth for small businesses and SMEs, and maps out how they can be alleviated in a cost-neutral strategy.
Following the event Julian said, “It was fantastic to meet so many people running small businesses across the York area. I was pleased to hear their success stories coming off the back of a strong economic recovery.” 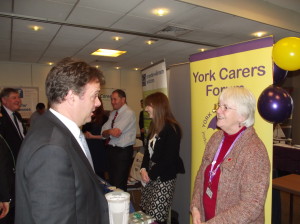 When asked about the #ibacksmallbusiness campaign Julian was very enthusiastic, “The great thing about this campaign is that it truly reflects the needs, problems and wishes of local businesses. Generating policy proposals from the members of the Federation is a brilliant way of gauging their real needs and the difficulties they face. Small businesses are the lifeblood of our economy and I am happy to support a grassroots campaign which encourages growth.”

Julian added that the success of events like these is strong evidence that the government’s long-term economic plan is truly working. In related good news, unemployment in York Outer has fallen by more than two thirds since 2010, far above the national average.