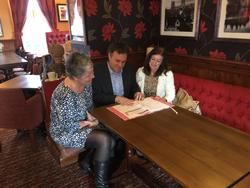 Julian has recently attended a coffee morning with two parents whose children suffer with autism, in an effort to better understand what life is like for families living with the condition.

He met with Mandy Brunskill of Clifton Moor, whose son Liam lives in a specialist facility in Thorne near Doncaster, as well as Ros Houghton of Wigginton, whose son Nathaniel, also in care, has recently moved back to the York area.

The meeting was organised by Ms Brunskill as part of the National Autistic Society’s ‘I’m One’ General Election campaign, which encourages families to arrange informal events with their Parliamentary Candidates in an effort to influence policy, improve public understanding of the condition and ensure that it is a priority for local politicians.

The group’s discussions centred over the differences in the provision of care and services in York compared with other areas, particularly for over 16s. The parents and Julian agreed that in their experiences, York was found wanting in many respects and Ms Brunskill said that this accounts for why her son Liam was forced to leave the area a few years ago. Julian has a strong record of representing parents’ concerns over the lack of facilities in York to cater for young adults with autism and he continues to represent Ms Brunskill and Ms Houghton, as well as other parents, in communications with the Council.

Discretionary care charges, which some local authorities like York are pursuing, leaving Liam Brunskill with little over £24 per week of his benefits to live on; the training of carers in dealing with people on the autistic spectrum and the amount of form filling involved when applying for certain benefits, were also covered during their discussions. 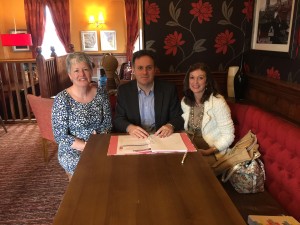 “I was absolutely delighted to have the chance to meet with my constituents and talk about the many difficult issues they face on a day to day basis when caring for their autistic children and protecting their interests. Like all parents, they want only what is best for their families and loved ones and I am disappointed to say that sometimes that can’t be achieved here in York. If re-elected in May, improving local provisions for people with autism will continue to be one of my key priorities.”

“I felt the meeting went extremely well.  I personally felt able to communicate our thoughts about what we felt was lacking with Autism and the journey we faced as a family.  I also felt Julian was very approachable and gave empathy to what we were saying.  This is important as we really felt like he cared about what we said and wanted to help and do something about it.”