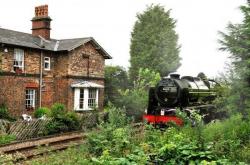 The latest tranche of funding will build upon the £400,000 worth of funding that was made available in 2020 to develop plans. This new funding comes from the Restoring Your Railway fund which is part of £500 million Government investment to reopen lines and stations as part of the Conservative levelling-up agenda to regenerate local economies and improve access to jobs, homes and education.

When confirming the funding, Minister of State for Transport Wendy Morton said:

“This funding will reconnect communities long cut off from the railway.

The last time you could catch a train from Haxby Station was 1930, George V was on the throne and The Times had just published their first-ever crossword. But now, thanks to this funding, communities across England could be reconnected to our railways once more.

This fund is a great example of how we are committed to helping communities across the country level up and reconnect people and businesses to new opportunities.”

“It is great to see the Government give another vote of confidence for reopening Haxby Railway Station by pledging a further tranche of funding to develop plans.

I have been campaigning for the return of rail services to Haxby since before I was elected and, even though we have had a few false starts in the last decade, I am excited from my talks with Ministers that the Government fully appreciate the levelling-up potential a new station will have for residents in the north of York.

It is not just York’s past which was built by railways but also our future. With new lines and better connections, we can attract high quality employment and better opportunities for generations to come. I will keep pressure on the Department for Transport by lobbying for further rounds of funding for Haxby Railway Station as well as use the potential improved commuter links as another reason why York would be an excellent home for Great British Railways!”