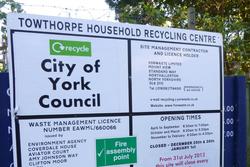 After lobbying City of York Council to reverse their decision to close household waste and recycling centres as well as cancel green waste collections, Julian welcomes news that usual service will be resuming within the next fortnight after working with Cllr Paul Doughty to raise the concerns of residents.

Julian and Cllr Doughty had been contacted by a number of York residents who were understandably dismayed at City of York Council’s decision to suspend vital services when neighbouring local authorities, such as Ryedale District Council and Harrogate Borough Council, continued collections while also providing robust responses to the Covid-19 outbreak.

After a number of discussions with City of York Council directors, Julian highlighted the issue with the Secretary of State for Housing, Communities and Local Government, Robert Jenrick MP, who went on to give a statement in the House of Commons last week stating that he expected local authorities to reopen waste collection centres and that councils should begin making preparations. Following this, Julian probed City of York Council for an update and yesterday they finally announced that household waste and recycling centres will reopen by appointment only from May 11. On May 18, green waste collections will resume.

As a way to raise constituent’s concerns directly, Julian has been in regular communication with City of York Council officials and takes part in a weekly telephone conference with key stakeholders. If you have a local authority issue that Julian could assist with, please get in touch and Julian will ensure it is addressed by City of York Council.