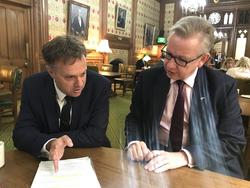 Last week, Julian spent some of his time in Westminster addressing the important issues of future environmental and agriculture policy post-Brexit, safeguarding UK crop science as we leave the EU, and support for rural businesses.

On Tuesday, in his capacity as Chairman of the All-Party Parliamentary Group on Science and Technology in Agriculture, he chaired a discussion on future innovation in the fresh produce industry post-Brexit with representatives from the supermarkets, science, and farming sectors. This highlighted the important fact that the UK is only 50% self-sufficient in fresh fruit and vegetables, and ensuring this high-value, productive industry has access to new technological and scientific developments will make a useful contribution towards ensuring the UK is able to prosper outside the EU.

Julian also met privately with Michael Gove, the new Environment Secretary, to lobby him on the need to protect the intellectual property of British plant breeders, a vital part of the UK science base, during the Brexit process. UK plant breeders are almost entirely dependent on royalties to finance reinvestment in future breeding, and to preserve Britain’s position in this cutting-edge sector there has to be a seamless transition from a European register of plant varieties to a UK one.

Wednesday was “Back British Farming Day” at Westminster, and Julian joined colleagues from all parties in pledging support for this vital economic and exporting sector as it prepares to confront the challenges and opportunities of leaving the EU. At his first full meeting as a new member of the Environment, Food and Rural Affairs Select Committee, Julian took part in questioning the Environment Secretary on current government policy on the full range of environmental and agricultural issues. Julian quizzed Michael Gove on what post-Brexit trade policy would mean for the farming sector, and emphasised the need for rules on pesticides to minimise the impact on the environment, and support their responsible use.

As Chairman of the All-Party Parliamentary Group for Rural Business, Julian also convened a meeting of a cross-party group of MPs and peers to question the Minister for Rural Affairs and Biosecurity, Lord Gardiner, on how the government could help businesses and communities in rural areas. The meeting touched on access to broadband, regional devolution, tourism, and preserving landscapes, among other issues, and gave MPs a good opportunity to have their thoughts noted by the government.

Julian said: “the environment and agriculture are some of the areas that will be most affected by Brexit, and it is vital we maintain and enhance our natural heritage and high-standard farming sector as we leave the EU. I am pleased to have already been able to use my new position on the House of Commons Environment Select Committee to raise issues of concern to residents in York Outer. I am glad I have been able to lobby Ministers this week to protect a vital part of the UK science base during the Brexit process, and to give rural businesses the support they need to generate prosperity in which we can all share.”