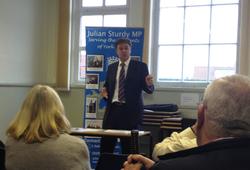 This week Julian is to host a public meeting on anti social behaviour issues in the Osbaldwick area. The meeting will take place at 6pm on Wednesday 22nd May at the Osbaldwick Village Hall.

The event, which will be in a question and answer format, will be open for all members of the public to attend. On the panel responding to residents’ concerns will be Julian, Superintendent Lisa Winward of the North Yorkshire Police’s Safer Neighbourhoods Team, Julia Muligan, the North Yorkshire Police and Crime Commissioner and Steve Waddington, the Assistant Director of Housing and Community Safety at the City of York Council.

Osbaldwick ward Councillor, Mark Warters, and members of the Parish Councils in Osbaldwick and Murton are also expected to attend, alongside many local residents.

On the upcoming meeting, Julian said:

“At a distressing time when the Council are proposing to extend the Osbaldwick Travellers Site and introduce new sites in the villages of Dunnington and Knapton as part of their draft Local Plan, I feel it is vital that, first of all, they must get a grip over their existing sites. For too long local residents have been forced to persevere with constant and incredibly frustrating anti social behaviour in the Osbaldwick area, which predominantly emanates from the Travellers site.

“The Police must do their bit to fight criminal activity in the area. However, if the Council were to bring in a tougher management plan for the Travellers site then I am confident that the anti social behaviour issues in the area would be significantly reduced. I am hopeful that this message will be heard loud and clear on Wednesday evening, when concerned local residents are given the chance to have their say.”

On behalf of the Osbaldwick community, Councillor Mark Warters said:

“I would like to thank the local MP, Julian Sturdy, for this initiative, whereby local residents will be able to air their concerns directly to Police & Crime Commissioner and Senior Council officials.”