York will be part of Tour de France 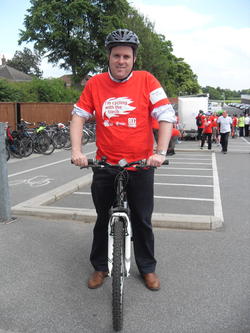 Julian has welcomed news that York will be part of the Tour de France 2014 route. Julian has also urged communities and businesses in the York area to make the most of the world’s largest annual sporting event coming to our great city.

Julian, who is a vice-chair of the All Party Parliamentary Group for 2014 Yorkshire and the UK Tour de France, has for some time been lobbying the government on behalf of Yorkshire’s Back le Bid campaign. This week Mr Sturdy met with Maria Miller, the Secretary of State for Culture, Media and Sport, to further discuss the effect the Tour de France will have on Yorkshire.

On the announcement, Julian said:

“I am delighted that the Tour de France organisers have appreciated the iconic nature and beauty of York and that has been recognised with the second day of the tour starting from our great city and heading out through my constituency to Knaresborough.”

“While the Olympic Torch relay was a big event last year, it will be surpassed in scale by next year’s Tour de France. Each night of the Tour, 1200 hotel rooms are booked and 2000 journalists travel with the race along its route.”

“I am looking forward to working with Yorkshire-based colleagues of all political persuasions over the next year, as a Vice-Chair of the All Party Group and I will do all I can to make sure the event is a massive success and one to remember for years to come. Indeed, I’m looking forward to the event so much that I’ve already signed up to volunteer as a ‘Le Tour Maker’. I would encourage all those who are also interested to visit the Welcome to Yorkshire website.”