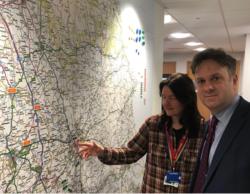 Julian this morning visited the Environment Agency’s York area incident room, from where the city’s flood response is being coordinated, and has been updated on the steps being taken to protect residents and property. On Sunday he checked the preparations being taken downriver at Naburn, including the provision of sandbags.

The Environment Agency are working closely with City of York Council to reinforce the flood defence measures already in place, and to respond to developments.

Water levels in the York area have peaked this afternoon and are beginning to drop back, having reached 4.41 metres above normal summer levels, which is lower than was first predicted and also lower than the over 5 metres recorded in 2015, which did such damage. Unlike in 2015, there is now the protection of the upgraded and functioning Foss Barrier in central York, and the pressure this time is on the Ouse, not the Foss as the rainwater is coming down from the Pennines.

Communities across York assessed to be at risk of flooding are being protected with sandbags by the Council, so there is no need for residents to contact City of York Council in these areas, as their needs are already the focus of defence efforts. In the York Outer constituency, Naburn, Fulford and Rawcliffe are being secured in this way.

For the latest information on local flood risk, residents can call Floodline on 0345 988 1188

If residents have serious concerns about flood risk, and/or feel there may be an emergency, they can ring the City of York Council customer service team on 01904 551 550

This morning, Julian said: “Following my visit to the Environment Agency incident room, I am reassured that flood protection measures are all currently going according to plan, and the situation is being handled well.I would like to pay tribute to all Environment Agency and Council staff who are working calmly to keep us all safe, in many cases doing longer shifts and overtime to respond to this incident.I am closely monitoring developments, and was pleased to see the defence provision being made at Naburn over the weekend.

I was however concerned to learn that the Naburn flood pump appears to have been stolen on Sunday. The Environment Agency are dealing with this situation, and it would be helpful if residents can remain vigilant regarding any other suspicious activity.

York Outer residents can also contact me if they have any concerns about flood defences in their area, or think there are issues that the authorities need to look into as a priority.”