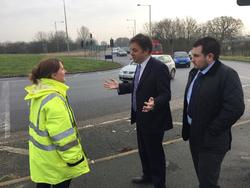 Julian has met with the Transport Minister, Robert Goodwill, to make the case for much needed investment in the outer ring road.

Julian hosted a delegation of York businesses and decision-makers in Parliament to call on the Department for Transport to agree to a long term solution to York’s congestion problems. In attendance was the Managing Director of the York Survey Supply Centre, Stuart Rawlings, the Chief Executive of Auto-horn Ltd, Richard Baines, the Head of Delivery at Nestlé UK & Ireland, Richard Hastings, as well as representatives from the City of York Council and the Local Enterprise Partnership.

The outer ring road is of critical importance for the economic wellbeing of York as it provides the main access to key retail, employment and leisure sites to the north and east of the city, including Nestle’s distribution centre and the Portakabin site on Wigginton Road. Mr Sturdy has previously met with the Council leaders to discuss a way forward on the issue and whilst £37.6 million has been earmarked to upgrade roundabouts on the busiest north-west section, greater funding has yet to be secured.

Julian said “The number of vehicles using the outer ring road has increased by more than 50% over the past 10 years and parts of the route are already at full capacity. If we don’t take the necessary action, morning peak journey times could increase from 20 minutes today to over an hour by the 2020s. With the controversial Local Plan proposals for massive housing developments across the outskirts of the city, urgent action is required if we are to make sure York does not grind to a halt in the not-too-distant future.”

“I have been raising York’s transport needs with government ministers ever since I was first elected in 2010. York residents and businesses are now forced to accommodate chronic levels of congestion as a feature of everyday life. This is simply not acceptable and in light of the £250 million Hopgrove junction and A64 upgrade, we have a once in a generation opportunity to achieve a long-term solution to York’s historic transport problems.”

The delegation came about following Julian raising the issue with the Prime Minister, who had previously voiced his concern about the traffic in York. Now is seen as the ideal time to press for improvements to be made, following the announcement of the £250 million funding for Hopgrove roundabout to the east of the city. The upgrade will result in the junction being grade separated and the Transport Minister has previously said that he hopes to see the A64 dualled as far as Whitwell-on-the-Hill.

The group called on the Transport Minister to commit to a comprehensive study into the future of York’s ring road with the view to providing a lasting solution to the city’s transport needs. This could be done in conjunction with the Hopgrove review which will be conducted by Highways Agency before construction begins on the £250 million upgrade. Members of the delegation also highlighted the strong economic case for funding improvements to the ring road. It was argued that York businesses are suffering a competitive disadvantage as the congestion is now being factored into their delivery charges, increasing business costs. Concerns were also raised about commercial drivers sitting in traffic and using potentially unsafe rat-runs around York’s suburbs to avoid congestion. The Council estimates that full dualling of the ring road would result in journey time savings of up to 60%, which would greatly boost York’s economy and notably improve motorists’ quality of life.

Following the delegation, Richard Hastings, Head of Delivery Nestlé UK & Ireland commented “As one of the most significant businesses in York with a large factory and distribution centre adjacent to the A1237, we rely heavily on the ring-road and acutely aware of the issues.  We would be supportive of any move to improve traffic flow and reduce congestion on York’s northern ring road.” Richard Baines, the Chief Executive of Auto-horn Ltd, agreed, saying “At Auto-horn we believe a dual carriageway ring road solution around York should not be underestimated. In our opinion it should be the number one local infrastructure project as it will support huge growth potential in the region and help eliminate congestion in our city centre.”

The Department for Transport have now agreed to look into whether the study into the Hopgrove upgrade could be expanded to include a larger study on the ring road. Potential funding arrangements will then be discussed at greater length at a follow up meeting Julian has secured with the Secretary of State for Transport, Patrick McLoughlin, which is scheduled to take place after the General Election. Julian is now working closely with local residents and businesses, the Council, and York’s two Local Enterprise Partnerships in order to contribute towards a more detailed study into York’s road transport network.