Working with Local Residents to Tackle Pockets of Anti-Social Behaviour 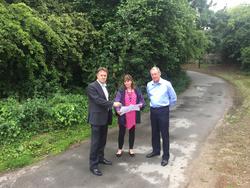 Julian has joined forces with Copmanthorpe Councillor David Carr in an effort to crack down on incidences of anti-social behaviour in the village.

The pair have been working closely together since a group of residents contacted them with serious concerns over boy-racing and loitering in the Low Green/Merchant’s Way area of Copmanthorpe. A snicket which connects the two roads is poorly lit and somewhat overgrown and as a result it has been cited as one of the main hotspots for troublemaking.

This culminated in a meeting which Julian hosted for concerned residents to raise their apprehensions directly with the Police. Officers encouraged residents to be more active in reporting incidences of suspected crime as and when they saw them.

However, Julian and Councillor Carr have drafted in support from the Council’s Head of Community Safety, Jane Mowat, and this week they met at the snicket, with the Police also in attendance, to discuss ways in which the vegetation could be thinned out and street lighting could be improved to make the site more open and visible.

“On the whole, we are very lucky not to have a significant problem with anti-social behaviour in the communities surrounding York. However, for me, this makes it all the more important that we do tackle these small pockets before they escalate and get out of hand. Police resources are clearly limited and unfortunately their time is often directed at dealing with the worst effects of the night-time economy in the City. While it’s vital that we ensure our suburban and rural communities get their fair share of policing, we must also look at practical solutions to these problems wherever possible and I will continue to work with Cllr Carr, the Community Safety Team and the Police to that effect.”