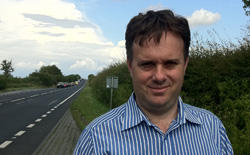 On Thursday 20th September, Julian hosted a second meeting of his York Transport Roundtable group. Over the past few months, Julian has been meeting with several prominent business and community leaders to discuss York’s transport woes and identify key infrastructure projects.

The business-led working group has already agreed that York’s transport infrastructure is creaking under present demand and threatening our city’s long-term competitiveness. Some employers have already raised the possibility of leaving their current locations unless substantial improvements can be made. At the latest working group meeting, members agreed that the increasing political unity on the matter must be met with strong business unity too. The City of York Council will be responsible for making various funding bids over the coming months and Julian was keen to stress that everyone involved should join forces to give such bids wholehearted support.

Speaking after the meeting, Julian said:-

“It is increasingly clear that York’s future transport needs are finally getting the cross-party, business-led attention that they require. Almost everyone in York agrees that an efficient transport network is crucial to the long-term prosperity and competitiveness of our great city. Yet, with our transport veins becoming increasingly blocked, we must all ensure that our words are backed up with firm and ambitious action. I personally welcome much of the City of York Council’s transport wish list and the business-led roundtable group will outline its own recommended projects later in the year. It is clear, however, that York must be prepared to bid for substantial funding at national and regional level. In fact, we will need to punch above our weight if we are to secure the necessary funds to undertaken substantial projects, such as dualling the northern ring road for instance. On this issue, it is right and proper that local politicians put their differences to one side and do all they can to push York’s case.

Indeed, I look forward to continuing to work with business and community leaders across York as we launch a fresh push for infrastructure funding and investment.”