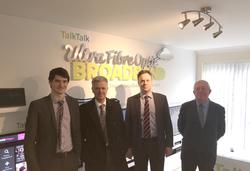 Alongside Rawcliffe and Clifton Without Ward Councillors Sam Lisle, Stuart Rawlings, and Peter Dew, Julian met with TalkTalk who are rolling out ultra-fibre optic (UFO) broadband delivering speeds of 1000 Mbps.

The joint venture with Sky and City Fibre is the first of its kind in the UK. The infrastructure has been laid in Rawcliffe and Clifton Without and works have now moved around to Huntington.

Commenting after the visit Julian said, “It is very exciting to see the speeds which can now be delivered, and it is fantastic that York has been chosen as the first city in the country to receive this new technology. Speeds of 1000Mpbs seem unnecessary now, but they ensure that our digital infrastructure is properly future proofed.

“Whilst it is welcome news that Rawcliffe, Clifton Without and Huntington are receiving this brilliant upgrade, there are areas within York Outer like Hessay, Askham Bryan, Askham Richard and Acaster Malbis, which are still on less than 2 Mbps. It is crucial that these so-called ‘not spots’ get better internet connections and I will continue to campaign for this digital divide to be overcome.”

In November 2015 the Prime Minister announced that under a Universal Service Obligation broadband speeds of at least 10 Mbps will be delivered to all households by 2020. Whilst the superfast broadband rollout has now covered 97% of properties in York, Julian remains concerned that the final 3% are being left at the bottom of the pile, growing the digital divide between rural and urban areas.